Burials deeper than your avalanche probe are not common, but if one occurs, you should be practiced in this Strike Team Shovelling technique for the greatest chance of survival.

Strike Team Shovelling works very well if you're able to get an avalanche probe strike on the buried victim. But what do you do in the case of deep burials where the subject is buried deeper than the length of your avalanche probe? This was the case with an avalanche in the Canadian Rockies in the Spring of 2018 (see photo above), in which a skier was buried 4 meters (13+ feet) below the surface and survived. Burials deeper than your avalanche probe are not common and victims buried deeper than two meters rarely survive but if a deep burial occurs, you should be practiced in a technique that will result in the greatest chance of survival.

It's a good idea to carry an avalanche probe that is at least 300cm in length. If you choose to carry a shorter probe, recognize the limitations of not being able to get a probe strike in deep burial situations, and that you will need to dig down in order to get a probe strike. The Diamond Method shown below will help you determine the best use of your Strike Team Shovelling resources in a deep burial situation.

Identify that it is a deep enough burial to require using this deep burial search technique (the subject is buried deeper than your probe length) with the searching avalanche transceiver held horizontally. 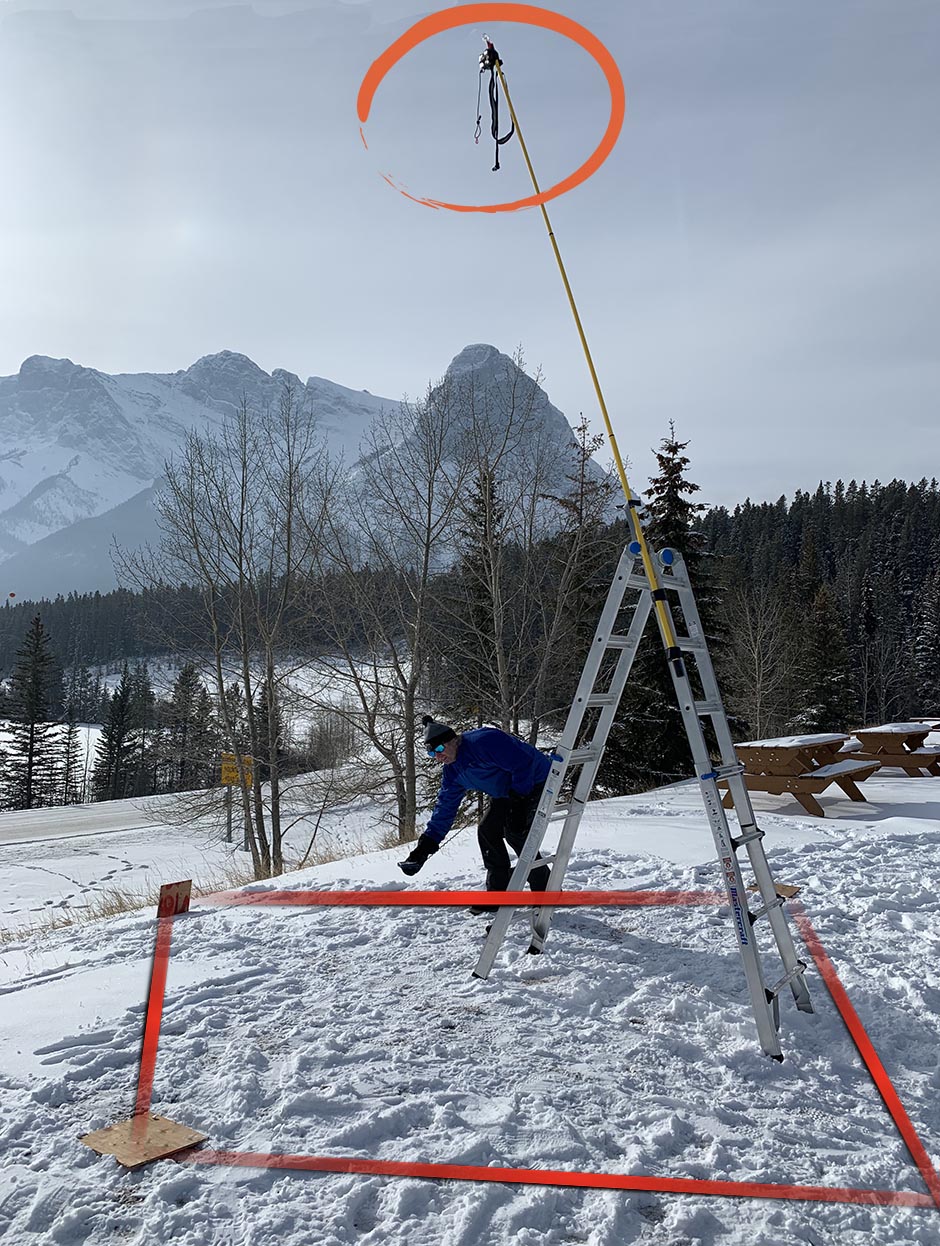 Jordy simulates a five-meter deep burial by attaching a transmit beacon to the top of a long pole. Note how he has done a secondary, detailed fine search to define four points where the distance readings on his transceiver jump significantly. The most likely burial area is at the center of this diamond. If he had shovelers available, they'd be digging just downhill as he bracketed out these points with his transceiver. Eventually, the excavation corridor would move up to the center of the diamond. Photo by Bruce Edgerly. Location: Canmore, AB.

If you do not have enough shovellers for the burial depth and slope
(See Strike Team Shovelling Method Part 1 for more info.)

This is very likely in companion rescues involving small groups. If you are alone, then immediately attempt to define the lowest distance reading using the Diamond Method. The difference is that nobody will be shoveling downhill of you. In the area around the lowest distance reading, excavate a corridor two meters wide and about two meters upslope and downslope of the lowest reading. Perform a fine search with your transceiver each time you excavate one additional meter in depth. Once you get a probe strike, start excavating at about half the burial depth downhill, and shovel down and forward toward the probe tip.

If you have a partner or two, then while you're bracketing the lowest distance reading with the Diamond Method and shoveling a corridor as above they can start shoveling downhill at about half the lowest distance reading. Once you get a probe strike, then they'll be in the right position for you to perform effective Strike Team Shovelling. Don't stop till you get to their airway!

Jordy enjoys guiding and instructing clients to achieve their personal best, with a focus on the safety and enjoyment of the mountains.