Best practices in shoveling techniques, equipment, and strategies continue to evolve in Avalanche Search and Rescue (AvSAR). Smart shoveling methods are critical, as shoveling consumes most of the time during an avalanche rescue. The Strike Team Shovelling method is a new angle that takes the best of the strategic shoveling and V-shaped conveyor methods commonly taught in avalanche rescue courses. This three-part series provides a detailed overview of strike team shoveling methods, which the Canadian Avalanche Association (CAA) started teaching in the past couple of years in all CAA AvSAR courses.

Shoveling practices have improved dramatically over the past ten years. Edgerly and Atkins Strategic Shovelling: The Next Frontier in Companion Rescue and Manuel Gensweins V-Shaped Conveyor Shovelling Method have introduced new ideas to improve shoveling efficiency and effectiveness. The new Strike Team Shovelling Method incorporates many techniques from these other methods. Strike Team Shovelling seeks to simplify the spacing, communication, and rotation of shovellers with a focus on teamwork and clear leadership during the shoveling phase of an avalanche rescue.

This method fits nicely into the Incident Command System (ICS), a function-based emergency management system often used by search-and-rescue organizations. One level of the ICS structure is the strike team. Strike teams are made up of groups of similar resources (such as shovellers). Of course, the Strike Team Shovelling Method can be used by both recreational parties and AvSAR teams during both companion and organized rescues.

It's much harder to shovel in flatter debris because there is no slope to throw the snow down. The excavation corridor needs to be longer if you are on a <25-degree slope angle (low angle debris pile), and the length of the excavation corridor should be about two times the burial depth. This will also create a lower angle ramp for extricating and packaging the subject for transport.

Next, determine how many strike team shovellers will be necessary. Divide the required corridor length by about 80cm of space needed for each shoveller. 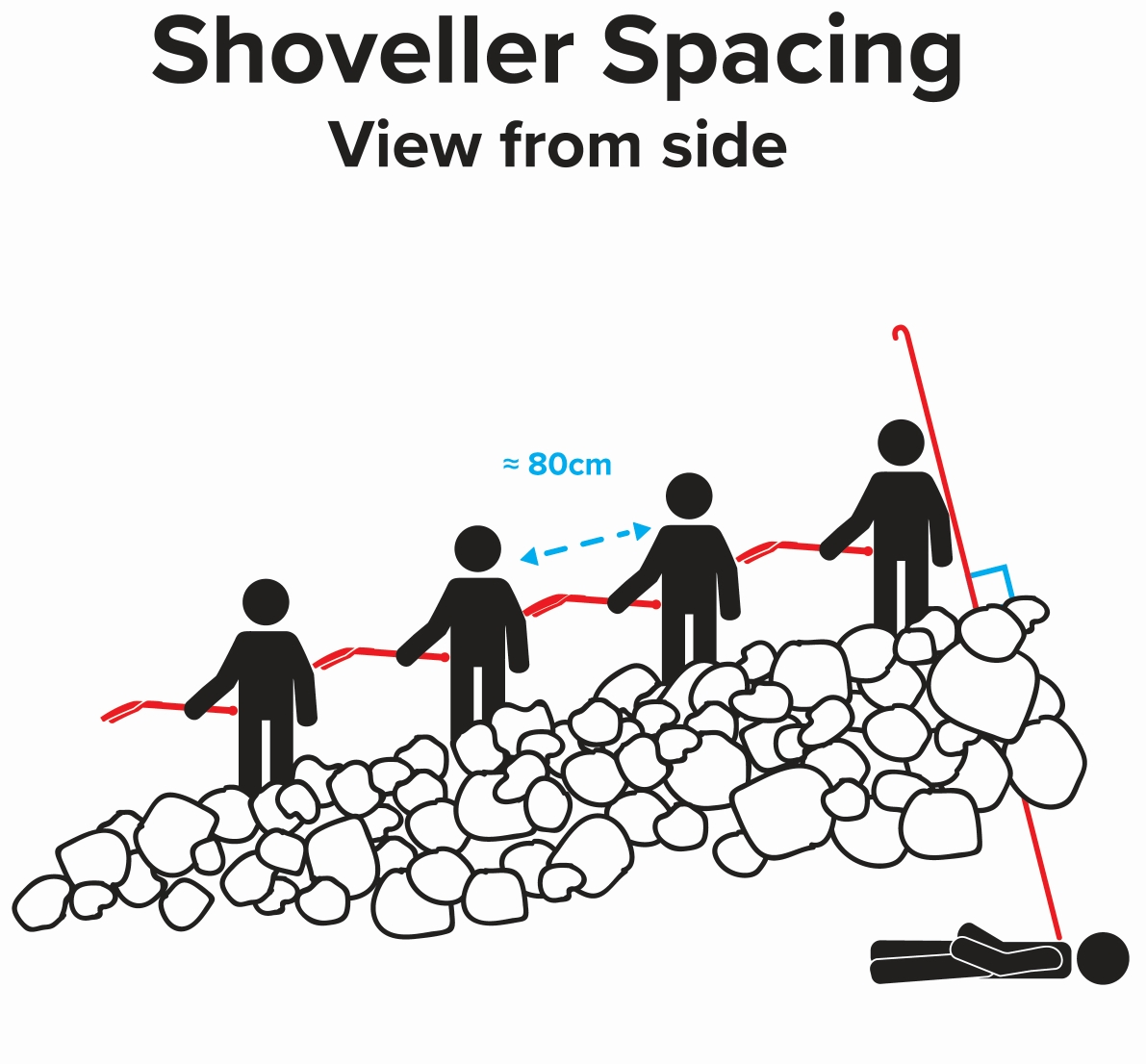 Line up the strike team to the downslope side of the probe (or in any direction from the probe if the debris is flat). Line up in a straight line. Position 1 (the lead shoveller) should have one shoulder touching the probe.

With shovel shafts fully extended, measure with a fully extended shovel from the hip of the forward shoveller to the elbow of the next shoveller (about 80cm) as the space between each shoveller. Each shoveller is responsible for 80cm of the excavation corridor. Shovel right down the probe if you get a probe strike. 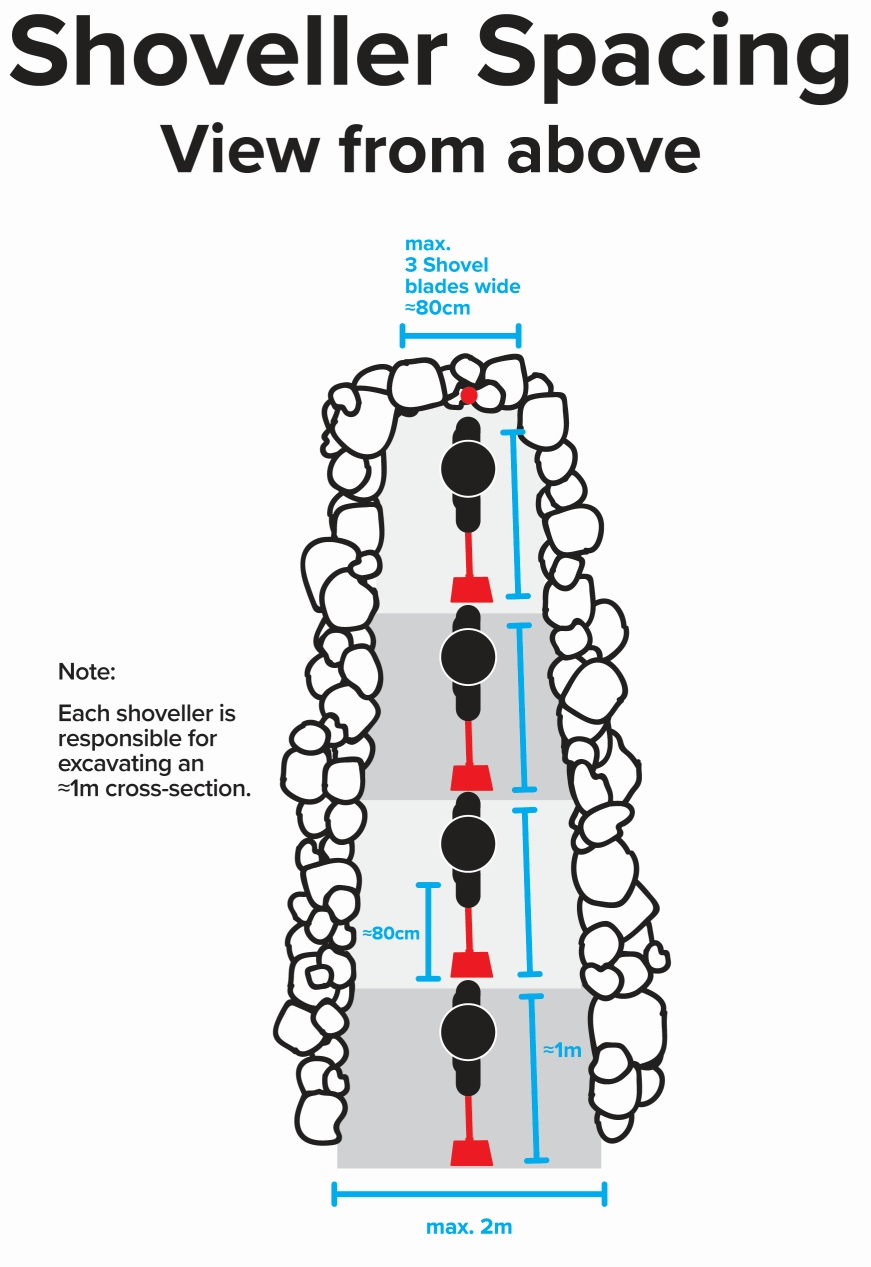 The excavation corridor should be about three shovel blades wide at the probe and should widen to a maximum of 2m, at which point the corridor walls stay parallel. The side walls should be kept vertical.

Consider doing positional probing if the avalanche burial depth is greater than about 2m and you have extra resources (probes and probers) available. You might be able to determine how the victim is positioned so you can center the excavation more precisely. Shovelers start digging down the original probe strike, then use another probe or several probes to determine the boundaries of the buried subject. Position a probe in the center of the buried avalanche victim and reposition your shovelers to dig down that probe. When positional probing, make sure you don't trample the area around the original probe strike; this could impact the victim's air pocket.

Avalanche debris is often firm, so chop the snow into blocks, then scoop the blocks back toward the shoveller behind you, while lifting it as little as possible. Do not lever your shovel like a garden spade; you risk breaking your shovel. Try paddling or sweeping rather than lifting each shovel full of snow. Avalanche professionals recommend sturdy, aluminum shovels for strike team shoveling over plastic in real avalanche debris. If steel rescue shovels area available, request they be brought to the avalanche site as soon as possible.

If you have the optimal number of Strike Team shovellers, the first or second person calls for rotation. The first person goes to the back, and all other shovelers rotate toward the front (#2 moves to #1 position, #3 to #2 position, etc.). Each shoveller should be responsible for approximately an 80cm cross-section of the excavation corridor.

Shovel for two to three minutes, then rotate. 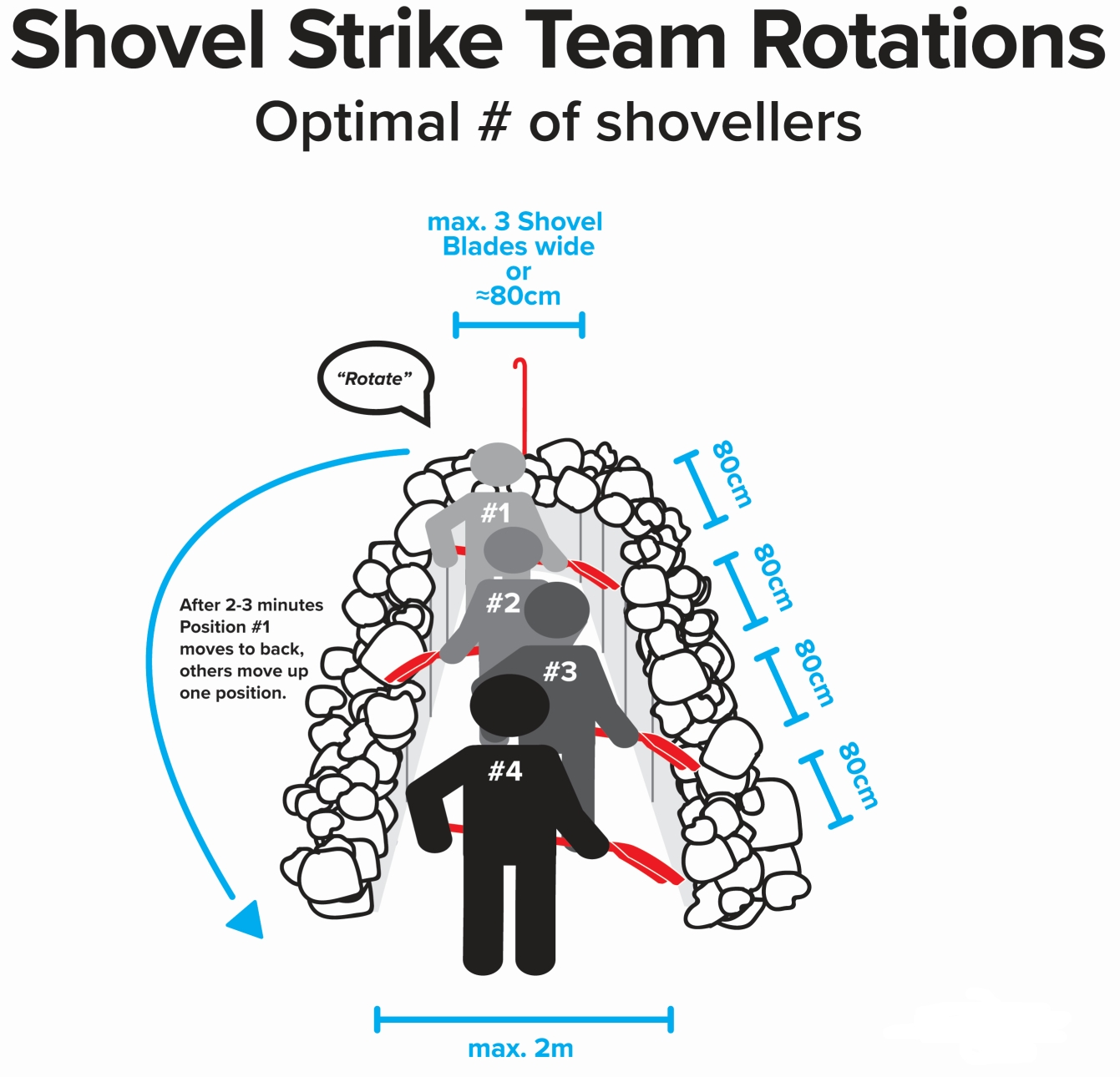 The lead or second shoveller can call the rotation whenever the lead shoveller starts to slow down or is getting tired or has shoveled for two to three minutes.

When there is one extra person in addition to the optimal number of shovellers, there can be one person designated to be a shovel master. The shovel master stands near the probe, ensures that spacing and technique remain correct, makes sure the side walls are vertical, and calls for the rotation. The shovel master has a shovel ready and jumps into position #1. All others rotate back one position. The last shoveller rotates into the shovel master position to rest for a cycle. 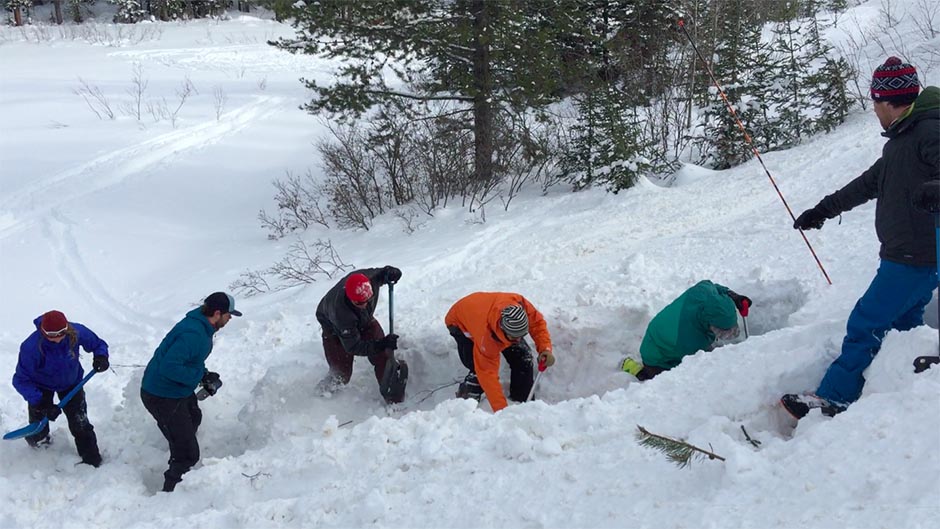 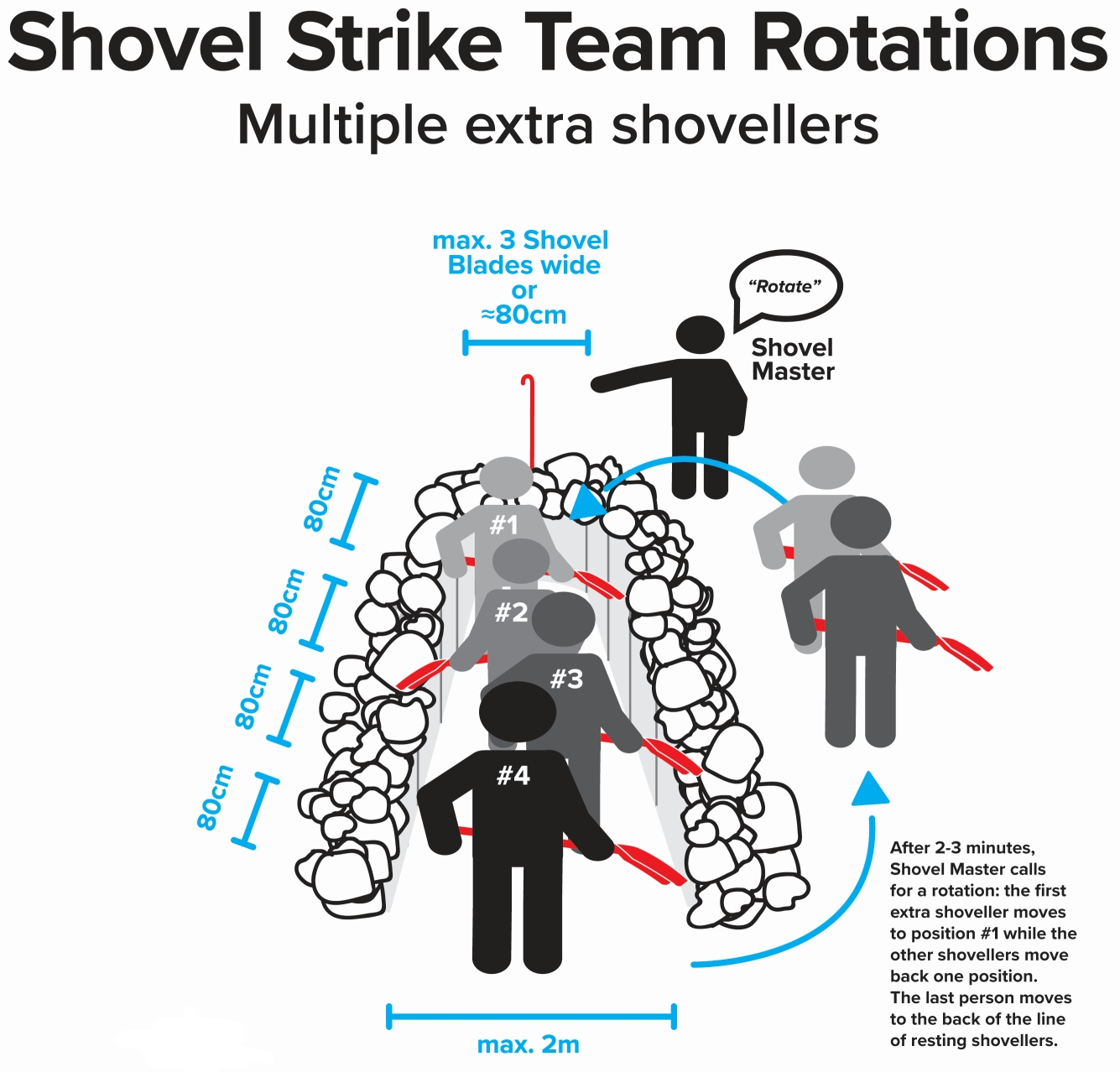 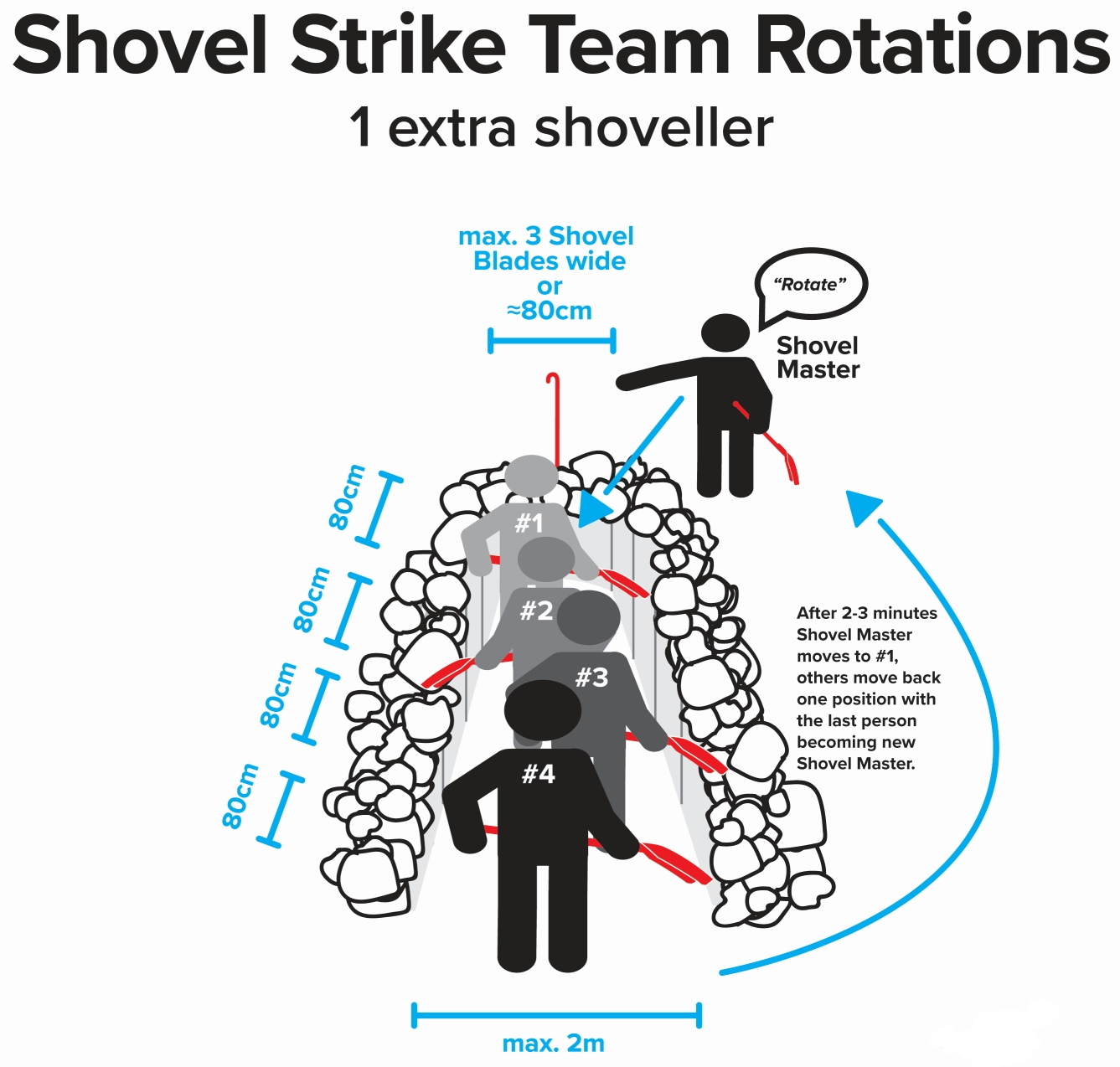 This is very likely in companion rescues involving small groups. To initially create the back portion of the excavation corridor, start shoveling downslope of the probe at a distance of about 1/2 the burial depth. Then shovel toward the probe and down to the probe tip.

If the subject is buried 1 meter or less

If the subject is buried one meter (1m) or less, put two shovellers at the front, digging right down to either side of the probe strike. This will increase the probability of locating a body part and therefore reaching the airway faster. The rest of the shovellers line up behind in a single file as per regular spacing. For shallow burials one meter (1m) deep or less, there is no rotation of shovellers unless one of the front shovellers breaks a shovel or starts to slow down.

In Part 2 and Part 3 of our Strike Team Shovelling series, well discuss 1) How to fine-tune the excavation once you reach the victim, and 2) What to do if the burial is so deep you don't actually have a probe strike. 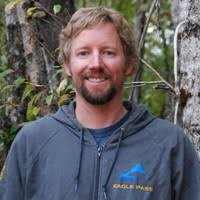