What to Look for in an Avalanche Forecast

Home /
Blog /
What to Look for in an Avalanche Forecast

This information is assembled into a forecast that backcountry users rely on as an important part of their backcountry planning. While these forecasts are based on science and observation and are generally reliable, it is not a 100% guarantee of actual conditions everywhere within the forecast area. While forecasts do provide accurate information, due to the complexities of snow and terrain, a forecast is a general assessment of the avalanche danger across the forecast area and not a guarantee of the conditions you'll find on any given slope. To further reduce your risks in the backcountry you also need to have some personal knowledge to recognize the various avalanche problems in the field; this is why it is important for backcountry users to get some formal avalanche training.

HOW TO READ AN AVALANCHE FORECAST

Most forecast centers now provide you with an array of forecasting tools to service beginner through advanced users. It is typically delivered in a tier system as follows:

That said, let's look at what information an avalanche forecast provides.

HOW DANGEROUS IS IT?

There is a universal avalanche danger scale that rates the hazard based on how easy an avalanche would be to trigger, and how big it would be if it did. Below is the North American Danger Scale. 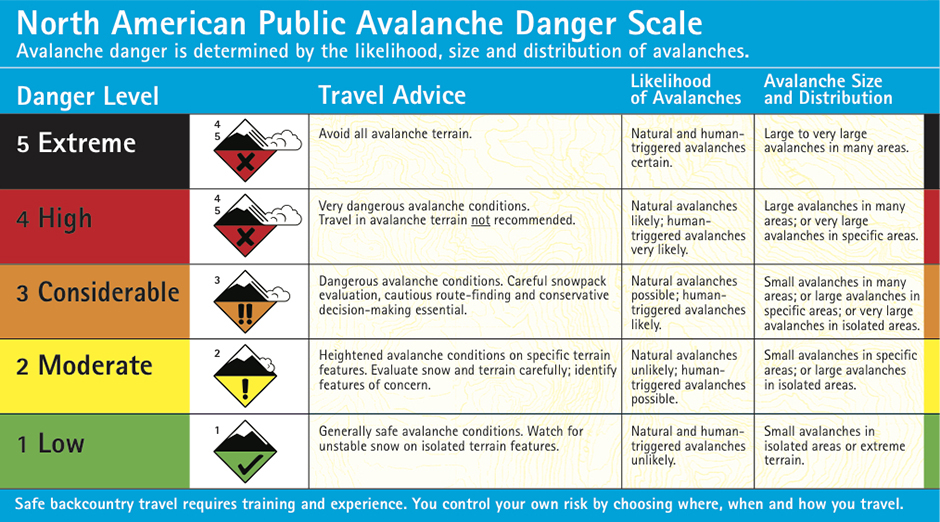 Be aware that although the considerable rating is in the middle of the scale, it is actually the highest danger rating that people will recreate in, anything above that and travel is simply too dangerous. CONSIDERABLE means human triggered avalanches are LIKELY. Only experienced and trained recreationalists should be in the backcountry during this danger level, and they will be extremely limited on where they can go and what they can do to reduce their risk.

WHERE IS THE AVALANCHE PROBLEM?

Where exactly is the danger or the avalanche problem? Snowpack is not uniform and stability can generally vary based on slope aspect and elevation. Forecasts centers will typically describe avalanche danger by elevation and aspect. A few different methods are illustrated below:

The UAC uses the danger rose to illustrate general avalanche danger as illustrated, and also where each avalanche concern is. Think of it as a 3D representation of the mountains with the hazard painted over it with respect to elevation and slope aspect. See more in the danger rose here:https://utahavalanchecenter.org/danger-rose-tutorial.

The CAIC uses a simple graphic describing avalanche hazard by elevation for their general forecast. As you scroll down the page there is a description of where each individual problem is with a danger rose (see below):

BCA has an informative video education series. Watch The Backcountry Basics Get the Forecast video to learn more.