Traditionally, users who venture into this extreme terrain are experienced riders with years of experience in the snowy mountains. But thats changing. Brock Bolin shares his insights into how snowbiking is changing the backcountry and avalanche safety.

My name is Brock Bolin, Safety Director for the Flathead Snowmobile Association and Accessory Manager at Penco Power Products in Kalipsell, MT. I would like to share some insight into a fairly new sport, snowbiking, and some of the unique safety challenges snowbikers are faced with when riding these incredible machines.

For those who are not familiar with this term, a snowbike is essentially a modern dirt bike, converted to use for the snow by the addition of a track system. The most popular and well known of these kits is the Timbersled Mountainhorse. I was introduced into the sport of snowbiking in 2012 when I was approached by the owner of Timbersled, Alan, about setting up a demo ride for these new machines, and gladly took the opportunity to explore what these things had to offer.

Being an avid snowmobiler, I was very skeptical that the Mountainhorse conversion could get around in the mountains, and compete with the very competitive mountain snowmobiles that the industry had to offer. Alan agreed to bring a fleet of his bikes over for our team and customers to test ride.

Shortly after starting our journey into the mountains on the Mountainhorse snowbike kits, I immediately realized that these machines were much more capable than I had originally thought. They were nimble and agile, light, and surprisingly capable for such a small motor. Having never been on something like this, I was amazed at how easily these machines traversed the sidehills, and how effortless they went through the deep powder we had on that amazing first ride. 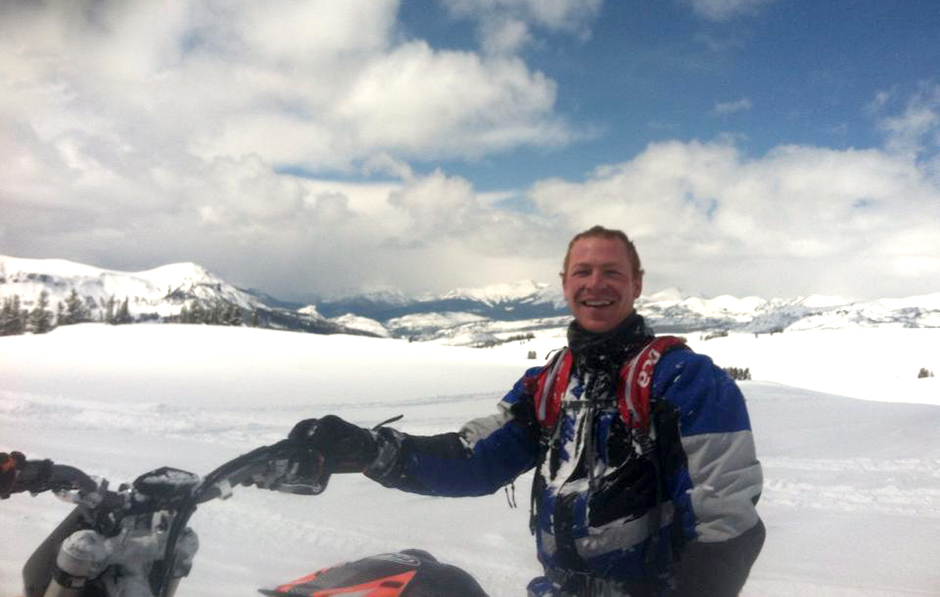 Since that day, our dealership has sold over 120 Mountainhorse kits and has had a demo fleet of three to four bikes every year. While teaching people how to ride, I am amazed at how easy it is for someone who has never even set eyes on one of these to get into amazingly steep and avalanche-prone terrain. Riding zones that would have required someone with years of snowmobile experience to access (and usually properly educated), are now easily accessible to even the most novice rider on a Mountainhorse. With this, I have realized that a snowbike-specific approach to riding in avalanche terrain is very critical to the safe operation of these vehicles. A person can safely traverse terrain never even thought possible on a snowmobile. With this, one can travel from a steep but relatively safe side hill in the timber, to an open face of an avalanche start zone literally within a split second. It is also possible to drop lines similar to downhill skiing, while maintaining total control of your descent by carving your way down the mountain. Careful evaluation, selective route finding, and being prepared through education and carrying proper gear are absolutely essential to riding the snowbike safely.

We are seeing a new user group emerge. Dirt bikers who have never spent time in the mountains in the winter are able to purchase a snowbike kit, install it on their bike, and ride extreme terrain on their first ride. Traditionally, users who venture into this extreme terrain are experienced riders with years of experience in the snowy mountains and thus usually have training on where to go and where not to go. But that's changing.

I have made it a point upon every snowbike sale to go over the importance of learning how simple it is to get into trouble, what gear to carry, and where to get the education one needs to make good decisions while snowbiking in avalanche terrain. New products such as the BCA Float MtnPro Vest, BC Link radio, Tracker3, Dozer shovel, and the Stealth series probe can help keep these riders prepared, but the best gear does one no good without the knowledge on how to use it. Education is the key to the safety of these riders, and I can see a need for snowbike-specific training to inform this specialized group on how to bring everyone home safely every ride.