Test deploy and get your avalanche airbags ready for the backcountry

If you're like the rest of us, you probably tossed your avalanche airbag into your garage or closet sometime late last spring, and you haven't thought of it since. Maybe you moved your shovel, probe, and first aid kit into your spring pack and kept riding for another month. Either way, that cylinder is still in there. With winter on the horizon, maybe it's time to pull it out and make sure it's ready to roll if winter hits early. Here are a few pre-season testing tips for getting your avalanche airbags is ready when called up for duty.

The first thing to do is to check the pressure. If it's still in the green zone like it probably was before you put it away, that means it's holding air nicely. If the pressure is 100 psi or more below the green, then you might have a slow leak (alternatively, it could have been filled all the way, but then cooled down after filling). Either way, you've got enough pressure for a test deployment. If it's empty, however then you need to get it filled first and if you put it away full and it's now empty then you better get it checked by an authorized Float refill center or BCA. 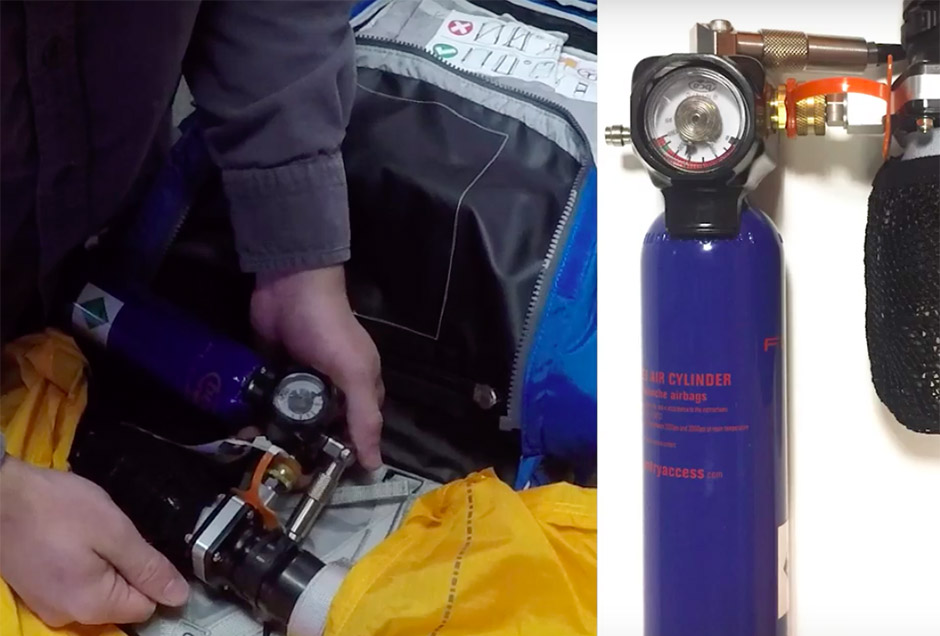 FLOAT FAQs AIR CYLINDER PRESSURE READINGS The pressure reading on your air cylinder will always change with temperature. If your gauge is green when filled at room temp 70 F (21 C), then you will get a full airbag deployment all the way down to -22 F (-30 C).

The next pre-season testing step is a test deployment. This enables you to check the entire system, including the trigger, cables, attachments, venturi, burst zipper, and airbag fabric itself. It also enables you to build some muscle memory and to get a feel for how hard you need to pull the trigger. The best place to do a test deployment is right there at the refill center.

You can find a list of refill centers worldwide here

Pull the trigger on the spot to inflate the airbag, then hand the cylinder to the refill technician to fill er up (he or she can let it cool while you're repacking the bag).

If the airbag doesn't deploy despite a full cylinder, then you've got issues. However, this is rare. The more likely scenario is a slow leak. If it leaked enough, the airbag might not even fully deploy. If this is the case or your gauge just isn't in the green then ask the technician to remove the head, clean all the threads, replace and lubricate both the valve stem o-ring and the head-to-tank o-ring and fill it up again. If they're following directions, they'll normally put a label on the cylinder with the date it was filled and the final pressure, after cooling. Your job is to check it in two weeks to see if the pressure has decreased. Two weeks is usually enough to determine whether there's a slow leak. This is why it's a good idea to do this now instead of the morning of a huge powder day!

If you're a DIYer, then you can do just about all of this yourself. Your Float system came with a Consumer Refill Kit that includes everything you need to remove the cylinder head and replace and lube your o-rings. This is easy to do if you check out our instructional videos. You can even fill it up yourself if you have a Benjamin High-Pressure Pump, which usually cost less than $150 on Amazon. This takes some elbow grease, but it only takes most people about 15 minutes. These pumps are indispensable if you travel a lot and don't feel like locating a refill or exchange center when traveling to exotic locations at odd hours of the night.

Once you've deployed your airbag and refilled the cylinder, it's time to deflate the airbag and repack it into the Float pack. This is easy, but there are a couple of tricks to make it faster: Always pull the zipper back over to its original position before starting to fold the airbag. This way you'll save time when you're getting the last bit of air out of the bag. To deflate the bag, you have to press the pressure release valve inside the venturi (engine) with a finger while applying pressure to the airbag. At some point, however, you'll need both hands to zip the airbag compartment fully closed. If you replace the zipper to its starting position and get it started with both hands before you even start folding the airbag, then you won't have to take your finger off the pressure release valve until the bitter end. This is important because when the pressure release valve is not depressed (especially with the 2.0 system), it's possible for air to get back into the airbag and make it harder to zip up the compartment.

The other trick involves the 1.0 system only: Make sure the cylinder is not connected to the system when you're at this stage of milking the air from the airbag. If the system is open you don't need to continue pressing the release valve; the last bit of air will come out of the air hose. Of course, remember to hook up the cylinder afterward!

With the cylinder and airbag fully checked, it's now time for the secondary survey, a term you might have learned in your first aid class. Give the entire pack a once-over and make sure there are no blown seams, missing straps (especially the all-important crotch strap), or broken buckles. An airbag won't do you any good if the attachment system is compromised and it gets pulled right off your body in an avalanche. If the secondary survey checks out, then you're free to toss your Float airbag right back into your closet but make sure you check the pressure in two weeks!

To watch all of our BCA instructional videos on how to set up, maintain, and travel with your Float avalanche airbag, visit our Float Videos page.