Why do a shovel tilt test? Because the results of the standard compression test could miss the upper layer due to compressing or squishing it. BCA ambassador Josh Kling outlines the best practices for snow stability tests with photos and videos.

Why do a Shovel Tilt snow stability test? Because the results of the standard compression test could miss the upper layer due to compressing or squishing it.

In the back of your mind, you may be wondering and worrying if these tests are correctly executed. False data could lead you to ski or ride terrain you shouldn't, OR it could keep you from terrain that's actually good to go.

Edge and the BCA team recently participated in the Pro 1 avalanche training course, and part of the homework was to watch these videos presented by Bruce Jamieson of the Applied Snow and Avalanche Research Center (ASARC) at the University of Calgary.

There are numerous snow stability tests out there. While it is always possible to use a scroll saw to pound a nail into a wall, it's not the best tool for the job. The same can be said for snow stability tests. Using the wrong test for the wrong avalanche problem is going to relay poor or inaccurate information. A perfect example is the very popular and well-known compression test. This is often the go-to test when folks begin to dig in the snow. However, using the compression test to look at wind slabs would be the wrong use of the test. The same would be said for utilizing the ever more popular extended column test to look at a wet slab issue.

So before one pulls out their shovel and saw and begins to dig, they must first figure out what the current avalanche problem is. This is typically described every morning in the daily avalanche report.

The Avalanche Observation and Reference Card designed and published by the American Avalanche Institute for Avalanche Research and Education (AIARE), is a great place to start. This one-page card lists: the avalanche problems, critical or red flag values for each problem, what are the relevant field tests for that problem, and then any extra important considerations.

An AIARE Observation and Reference Card is included in the classic AIARE Field Book, available online to purchase from BCA, to go with your BCA Snow Study Kit.

Knowing these characteristics in conjunction with what tests to do gives you a tremendous advantage when assessing and choosing terrain. For example, a loose snow avalanche is going to tend to (but not always) be contained by terrain features more than a slab avalanche.

An example of a slab avalanche that was not contained by terrain features. Red Mountain Pass, CO, with the AIARE Level 2 PowerPoint 2.1 version slide.

So now you have figured out what the specific avalanche problem is and have begun to decide what tests to utilize.

To execute a test properly with good craftsmanship requires the proper tools. This is typically a strong, packable metal avalanche shovel, and good snow saw as the BCA snow saw. For all these tests, a snow observer should remember garbage in will equal garbage out. If the tests are executed sloppily, the results will not be accurate. It is better to know and be able to execute one or two tests correctly than try and execute tests in poor form.

So if you are going to learn three snow tests to put in your snow observers toolbox, which three should you learn? And what order should you execute them? Great questions! 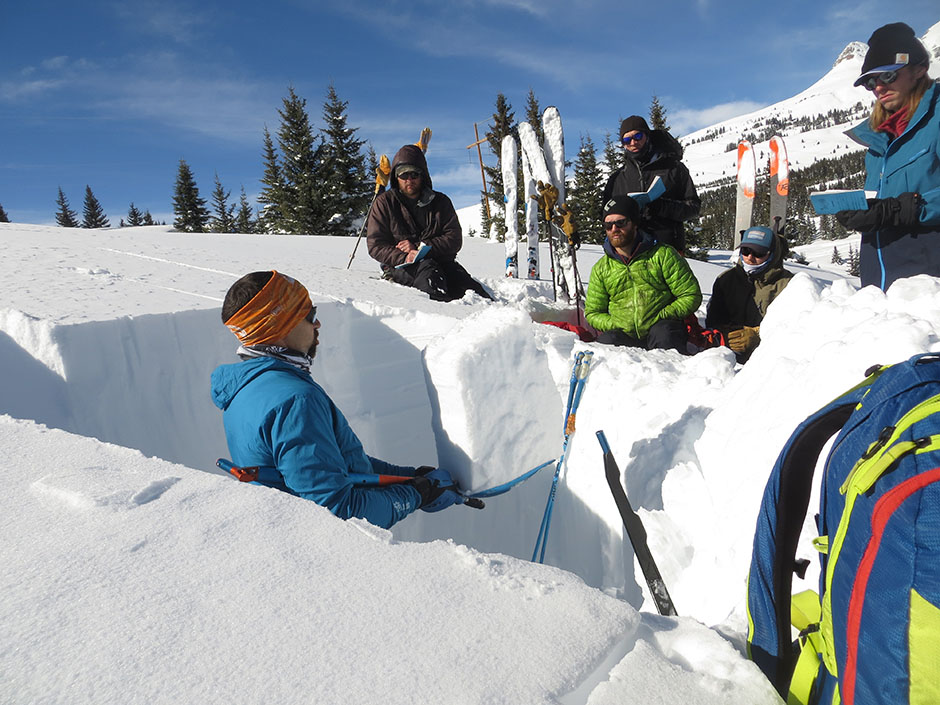 How to Execute a Shovel Tilt Snow Stability Test: This is a great test to do in four-finger or softer snow in the upper 40 cm of the snowpack. This is often the freshie snow. If you execute a standard compression test in super-fluffy new snow, it is just going to squish and shoot out the sides of the shovel. While it sounds like there are lots of steps to this test, it is rather easy and fast. It also clears out a column of snow to prepare you for executing a compression test. To execute the shovel tilt test:

A Shovel Tilt test can help illuminate layers that may have been otherwise missed. This is especially true for new, four-finger, or fist hard snow.

How to Execute a Compression Snow Stability Test: The Compression test is the classic test that many backcountry travelers know. This test is valid for four-finger or harder (so 4F, 1F, P, K, I) snow up to 100 cm deep. If there is a layer in question that is 100 cm deep, you can isolate the column up to 120 cm in order to test the layer at 100. To execute:

How to Execute an Extended Column Snow Stability Test: While the compression test looks at fracture initiation (is it going to crack?) the extended column test looks propagation propensity (is the fracture going to propagate across the slope). Like the compression test, this extended column test is valid for four-finger or harder (so 4F, 1F, P, K, I) snow up to 100 cm deep. If there is a layer in question that is 100 cm deep, you can isolate the column up to 120 cm in order to test the layer at 100.

With these three standardized snow stability tests, a winter backcountry traveler will cover the majority of (but not all) avalanche problems they will encounter on a regular basis. Perfect these three snow stability tests in good style before trying to expand on to more advanced tests. Ideally, take an avalanche course endorsed by the American Avalanche Association, American Avalanche Institute, AIARE, Canadian Avalanche Association, or Avalanche Canada. Practicing these skills under the direct supervision of a trained and professional eye will help you build good habits from the start. Taking a class can also help expedite your learning curve. The art is in the application. Just because you have learned, and even perfected the well-crafted shovel tilt test or extended column test does not necessarily mean that you have the judgment to use those tests for accurate snow assessment.

Josh Kling is an AMGA Certified Alpine & Rock Guide, AMGA Assistant Ski Guide, AIARE Course Leader, and the Coordinator of Permitting and Programing for the Outdoor Pursuits program at Fort Lewis College. Kling has been recreating in the wintery San Juan Mountains for close to 20 years and ski guiding in them since 2003. He is also the author of the Silverton Off-Piste Ski Atlas, the only published ski guidebook for the San Juan Mountains. If you are planning a tour, read his guide to "How to Choose the Perfect Backcountry Hut."