After this snowmobile-specific level 1 avalanche training experience, I walked away with absolute conviction of safety in the backcountry, educating oneself, utilizing safety equipment, researching your riding area avalanche reports, practicing with your equipment and choosing your riding buddies wisely.

As a sponsored Athlete for BCA, it is required that I complete an advanced avalanche course. Over the past few years, I have taken several avalanche awareness classes and a couple in snow classes. However, BCA required something more from their athletes we are all encouraged to show others the importance to know before you go and lead by example.

Knowing the importance of this requirement and my desire to learn more, I immediately reached out to a trusted friend and very experienced avalanche educator, Mike Duffy of Avalanche1.com. I needed to find out where I could take a snowmobile-specific level 1 avalanche course in the Pacific Northwest. Finding this type of training early in the season is not an easy task. Classes are generally not posted and planned dates are tentative because of the inability to predict the season's weather. I had a couple of choices: wait until January to take the Canadian AST level 1 near me in BC, or a snowmobile specific level 1 class being provided by Silverton Avalanche School in Colorado. The Silverton Avalanche School has been holding snowmobile-specific level 1 class for the last five years.

Silverton, CO is where the pros go to learn about avalanche safety. The town is located at 9,318 feet and nestled among the mountains and multiple natural avalanche paths. I also learned that the snow is very different in Colorado compared to our Pacific Northwest Cascade Concrete Maritime snowpack. He explained that is would be very beneficial for me to experience the lighter Continental snowpack of Colorado, especially since I travel to many different riding areas with varied snow conditions. In addition, Mike would be one of the instructors for this class. It didn't take much arm-twisting to bite the bullet and book my training and travel arrangements for Silverton!

I decided to fly into Grand Junction, CO, and take the several hour drive through Red Mountain Pass. For those of you who do not know, this pass has a sketchy two-mile stretch with no shoulder or guardrail to protect you from the thousand-foot vertical drop below. I trusted Mikes's driving ability and closed my eyes.

We unloaded and proceeded to our classroom, where I met my eleven other classmates. I would be the only female in our class. (I'm used to being with guys in the backcountry.) We had a potpourri of students and avid backcountry enthusiasts. Most were from neighboring towns or cities wanting to learn more. Then, there was a trio of chain smokers from Texas very new to the sport.

Our three-day course was specifically designed for snowmobilers and mountain riders, incorporating the right amount of classroom training along with true, on-snow backcountry experience.

Our on-snow experience was intense. The first day started with understanding our transceivers. There are so many different makes and models, and some are definitely better than others. Mine is the BCA Tracker3. I found it to be easy to use and fits securely in a pocket of my Float MtnPro Vest Avalanche Airbag. This transceiver has multiple antennae, as well as a Big Picture mode for multiple burial scenarios. During this portion of our training, we practiced over and over with our transceivers, single burial, and multiple burials. I became very comfortable with the Big Picture mode of my T3. Doing this at 9,318 ft definitely had me winded.

After our transceiver practice, we rode our sleds to a higher backcountry elevation about 12,000 ft. At this point, we learned about snow pit profiles, using observations and tests, recognizing instabilities in the snowpack, as well as looking for avalanche evidence. Right away we saw a couple of avalanche slides. Our class split up and rode across the valley in the lightest, deepest snow I had ever ridden in. Certainly a lot different than the Northwest snow I am used to. Once we made it to our destination we began to dig a snow pit to observe the snow layers and learn about facets and instability. This was a North facing slope and quite stable. Our group decided to travel across the valley to the Southwestern-facing slope where there was visible avalanche evidence. At this location, we dug another snow pit and uncovered an unstable layer in our tests. I found this part of the training fascinating, especially looking and the snow under a scope. 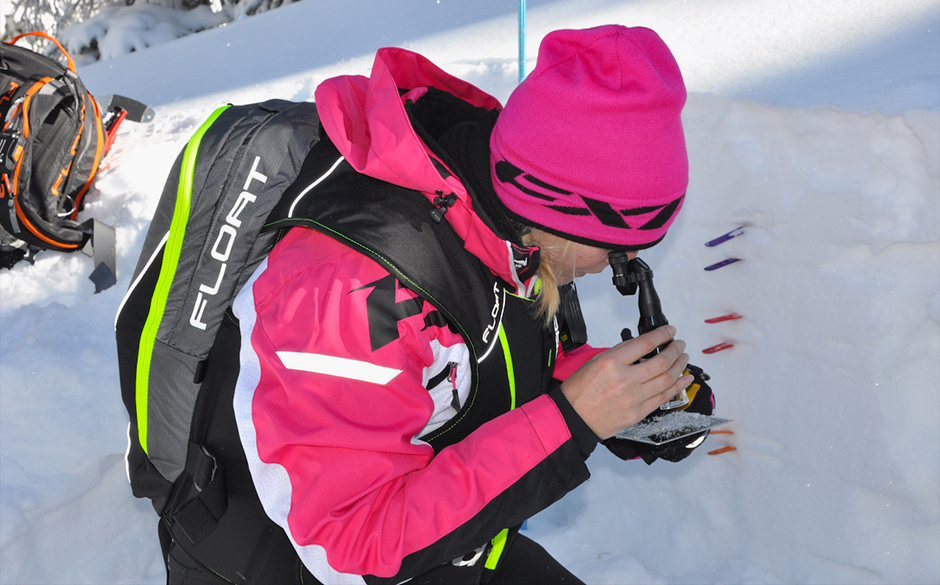 After a little while, our groups switched and we joined Mike Duffy for companion rescue scenarios using all of our safety equipment. transceiver, probe, and shovel. In addition to my T3, I was also using the Stealth 270 Avalanche Probe and the D-2 Ext Hoe Avalanche Shovel. Mike arranged multiple burial scenarios, our group chose a leader and we all worked as fast as we could to find our victims. Right away I noticed I was out of breath, my lungs feeling like they were going to pop, keeping me from moving as quickly as I am able to at a lower elevation. It did not stop my determination for the task at hand and the importance of it. With my T3 in search mode, I ran through the thigh-deep snow as quickly as I could to find the buried target. Once I was in a very close range, I utilized my probe as we were taught and started digging like mad with the hoe shovel. I was completely impressed with how much snow this shovel could move and quickly. Practicing scenarios like this drove home how important it is to have riding buddies who know how to use their safety equipment.

Our class of 12 students split into two groups. Each group had a real-life scenario of a 5-person burial, 3 buried with Transceivers, and 2 without. We were able to use our sleds and all of our safety equipment. This was in intense practice, one that felt real to me in every way. It was very interesting to see the techniques each group utilized, leadership styles, communication, utilizing radios, sleds, visual clues, transceivers, probes, and shovels.

When it came time to search, I felt uncomfortable with a couple of the people in my group and their ability. It really made me reflect on the importance of whom I choose to ride with. As our scenario began, I chose to ride my sled to look for visual clues, I found two surface clues immediately. However, not everyone in my group had radios, so our communication was verbal and it was not clear with people spread out and two sleds running. Unfortunately, one of the visual clues was not heard when I pointed it out from a distance, showing the importance of communicating effectively over distance and with environmental noise.

All of us were working the search mode and the big picture multiple burial mode of my T3 worked brilliantly. Our group found the three buried transceivers and one of the burials without was found by visual clue. We had one more to save, and this burial did not have a transceiver. As I was running and gasping for air at 12,000 feet I found that visual clue I pointed out earlier, a glove. Another in my group was near and we started probing. My heart and mind were racing, as I knew we did not have much time and we needed to move fast. Pretty quickly I thought I had a strike and we started digging and digging until we hit the ground. False strike! We kept probing and probing and we could not find our victim. It was so frustrating and when our instructors called time. It really felt heartbreaking to know we did not make our rescue in time. As it turns out our target victim was just a few feet away. It was a huge eye-opener to the seriousness of wearing a transceiver.

After this snowmobile-specific level 1 avalanche training experience, I walked away with absolute conviction of safety in the backcountry, educating oneself, utilizing safety equipment, researching your riding area avalanche reports, practicing with your equipment, and choosing your riding buddies wisely. These are all important lessons that will be riding with me this winter and every winter from now on.